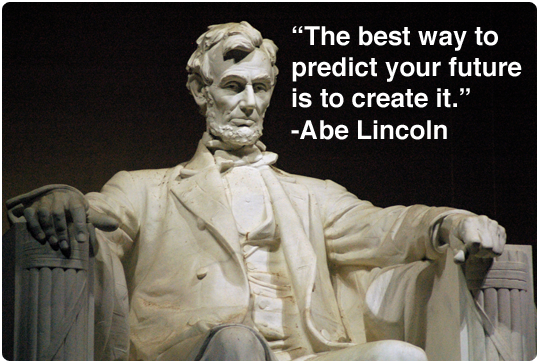 Holding History. Writing the Future. This phrase rings true as I write about one of the most chronicled Presidents in history. That’s why I have always and will continue to ‘Write My Future’, because it is one of the most powerful things one can do.

Honest Abe, he was called…

Scores of books and movies and documentaries have chronicled his life. His words have been celebrated and his actions scrutinized for generations as one of the most controversial, criticized, and revered figures in history.

Whether bronzed as a hero or caricatured as a buffoon, the actions of Abraham Lincoln in times of extreme adversity have become a template by which we measure true leadership. His speeches inspire the masses to this day, rivaling scripture in the minds of today’s greatest thinkers.

His ability to turn a phrase has been likened to a force. His voice was said to have brimmed with conviction and reason. His compelling words still ring with pure life today – brilliantly harnessed thoughts turned into moving and powerful imagery.

Yet, he never lost his gift for asking an honest question. One of my favorite Lincoln moments, as recounted for some seven score and 12 years now, goes something like this:

He sat in quietness, typically regal and stoic, in the company of his hosts. His manner was fatherly, his words kind. A bit awkward, as always due to his lankiness, his brow furrowed with each sip from the delicate cup in his rather large hand. It was a hand more accustomed to the feel of a rough-hewn axe handle than the delicate stem of a sterling silver spoon.

Of course, he often found himself surrounded by pomp and circumstance during those days. After all, being President of the United States of America was no small thing…and the gilded parlors of the nation’s capital would always be to him a far cry from the backwoods of Larue County, Kentucky, where fried squirrel and fat-back had been the highly-prized fare of his childhood.

His present company was clearly accustomed to finery, conducting themselves with the utmost of social graces. When the hostess leaned forward to refill Mr. Lincoln’s cup, he politely placed his large hand over the dainty cup, and in his kindest, most respectful tone, replied, “Madame, if that is coffee, I’d like some tea. And if it’s tea, could I trouble you for some coffee?”

Yes-sir-ee, Honest Abe knew how to ask a question. In any kind of company. The same way he had learned from his elders as a child in the backwoods of Kentucky.

This site uses Akismet to reduce spam. Learn how your comment data is processed.